Why Roy Moore is the biggest political story of the moment 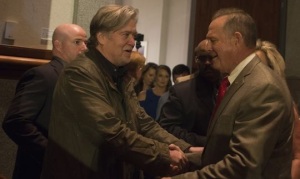 Arguably the most important political story happening right now is the ongoing scandal involving Roy Moore. Once the Chief Justice of the Alabama Supreme Court, Moore was removed for his lawlessness. Despite this, voters in Alabama – following a relentless campaign by the far-right website Breitbart – made Moore the Republican nominee to replace Jeff Sessions in the Senate. Moore’s virulently homophobic, theocratic ideology already made him controversial to his own party, but last week’s allegations that he preyed on teenage girls made Moore look truly vulnerable. END_OF_DOCUMENT_TOKEN_TO_BE_REPLACED