Reminder: Torture is not our only crime 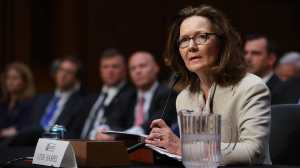 Gina Haspel, who oversaw a CIA black site in Thailand, is poised to become the agency’s new director.

The Senate is prepared to confirm Gina Haspel, a longtime CIA official, to replace Mike Pompeo as the agency’s director. During her confirmation hearings, Haspel’s role in overseeing CIA torture programs – or “enhanced interrogation” – was a focal point. Haspel made headlines when she refused to answer Senator Kamala Harris’s question of whether “the previous interrogation techniques were immoral.” Her record on torture led Republican Senator John McCain, famously a torture survivor himself, to announce his opposition to her appointment.

Because of the secretive nature of the torture program, it’s difficult to know exactly what Haspel is responsible for. What is known is that she oversaw a CIA black site in Thailand to which suspected terrorists were disappeared, stripped of all human rights, and tortured. Under Haspel’s supervision, suspects were chained to walls, deprived of sleep, waterboarded, starved, twisted, psychologically traumatized, and beaten, all with no criminal charges, no attorney, and no public knowledge of their imprisonment. She later helped destroy evidence of the CIA’s crimes.

Despite her record, Haspel enjoys a consensus of support from establishment national security officials, including two former Obama-era CIA directors.  President Obama himself may have paved the way for her directorship by his refusal to investigate or hold accountable Bush-era torturers, saying, “We need to look forward as opposed to looking backwards.” Former Vice President Dick Cheney enthusiastically endorsed Haspel and went even further, saying, “The techniques we used were not torture… if it were my call, I’d do it again.”

Then on Friday, reports leaked that Kelly Sadler, a special assistant to President Trump, had remarked during a staff meeting that John McCain’s opposition to Haspel was irrelevant because “he’s dying anyway.” The resulting snafu effectively shifted the national conversation away from Haspel’s torture record and onto the crassness of the Trump Administration. A broad spectrum of pundits and politicians, from democratic socialist Bernie Sanders to Republican Lindsey Graham, demanded an apology from the White House.

McCain is widely regarded as an American hero, so such a dismissive and crude joke about him caused fits. But leaving aside the tastelessness of Sadler’s remark, it’s well worth examining McCain’s record. He’s been a consistent opponent of the US torture program going back to the Bush years, a position chalked up to his own harrowing experience as a prisoner of war in Vietnam.

On the other hand, McCain is one of the most hawkish senators in modern history and has been a reliable supporter of virtually every act of US aggression. He has called for military action in Syria, Lybia, Kosovo, Nigeria, Bosnia, North Korea, Sudan, and elsewhere. As a presidential candidate in 2007, he sang a song called “Bomb Iran.” He was an enthusiastic cheerleader of the 2003 invasion of Iraq, perhaps the most consequential crime of the last four decades of human history; one 2013 estimate placed the number of dead Iraqis at 500,000.

McCain is not alone in his warmongering. In fact, he’s a quintessential representation of American foreign policy going back decades, right up to President Trump. Recent shifts in the Trump Administration indicate increasing hostilities with Iran, quite possibly leading up to war. Trump has maintained or increased US involvement in countries like Afghanistan and has twice in his presidency bombed Syria, in flagrant violation of both international law and the US Constitution.  As a candidate, Trump boldly promised to resurrect the torture program, making his appointment of Haspel doubly ominous.

It’s impossible to calculate the sum total of death and cruelty visited on the world by McCain’s, and the US government’s, militarism. Kamala Harris was right to ask Haspel about the morality of torture, but notice that no one in official Washington challenges the morality of invasions and dropping bombs. There are no sanctimonious declarations of “That’s not what America stands for” when millions lose their lives, homes, and loved ones as a consequence of military aggression enabled by John McCain and others.

Haspel’s likely confirmation is a stark reminder that the United States is a lawless nation. She is a war criminal complicit in torture. In terms of body count, though, McCain has her beat by a country mile. He has no moral high ground to stand on. To be against torture but in favor of mass slaughter is a truly difficult, if not impossible, philosophical position to justify.