Donald Trump and the right-wing presumption of innocence 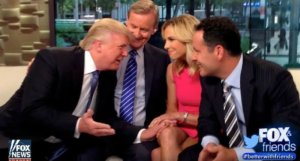 Right-wing media is universally friendly to Trump, taking his innocence for granted and echoing his conspiracy theories about the investigation into his shady world.

President Donald Trump has escalated his attacks on the special counsel investigating his campaign’s alleged ties to Russian election interference. Last week Trump unleashed a torrent of tweets in an attempt to undermine the investigation’s credibility. Even as a deluge of shady new information about Trump associates pours in daily, from his personal attorney to his own children and son-in-law, conservative talking heads have dug in their heels behind the president more defiantly than ever.

New examples air every minute on FOX News, but one case in point is an interview FOX personality Jesse Watters gave to former Bush White House lawyer Richard Painter. During the interview, Watters repeatedly insists that there is no evidence of collusion, then dismisses not just the evidence Painter raises, but the very concept of evidence. Watters also presumes that the attendees of the infamous June 9 Trump Tower meeting, including Donald Trump, Jr., Jared Kushner, and Paul Manafort, told the whole truth in their Senate testimony – as though powerful Republicans under investigation for high crimes wouldn’t lie.

Such a generous presumption of innocence sits at odds with the furor conservative media employed to justify the murder of 17-year-old Trayvon Martin, a black teenager shot to death by neighborhood watchman George Zimmerman for looking “like he’s up to no good.” FOX host and informal Trump adviser Sean Hannity invited Zimmerman on his program to explain to a sympathetic audience why he had to shoot a child. Right-wing commentators laid guilt on Martin for crimes as petty and irrelevant as smoking pot and being “no angel.”

On FOX News, you’re supposed to believe that Trayvon Martin deserved to be killed, but that Donald Trump, Jr. would never lie to get himself out of trouble. Conservatives extend this presumption of innocence to virtually everyone in Trump’s inner circle, and especially to Trump himself. This despite the fact that, according to The Hill, “Mueller’s investigation has issued 17 criminal indictments and has gotten five guilty pleas.” If there is any such thing as guilt by association, Donald Trump certainly qualifies.

In recent weeks, Americans learned that Donald Trump, Jr. may have solicited help from foreign governments other than Russia, including Saudi Arabia and the United Arab Emirates. China approved several new Ivanka Trump trademarks after President Trump publicly announced his intention to save jobs at their telecommunications giant, ZTE. And we now know that Michael Cohen, Trump’s personal attorney, sold access to the president to companies like AT&T and Novartis, as well as to Russian oligarchs, in a textbook case of pay-to-play corruption.

For his entire adult life, Trump has been a business criminal. His very first national headlines came when Trump and his father were sued by the Justice Department for housing discrimination. Hundreds of contractors have alleged that Trump didn’t pay them. In November 2016, shortly after winning the presidency, Trump was ordered to pay $25 million for defrauding the American people with Trump University. It is not a stretch to imagine this unscrupulous bigot is involved in even higher crimes.

Trump is at the epicenter of a whirlwind of shady characters and business deals, all of which seem designed to keep Trump himself one or two steps removed. As anyone who’s investigated organized crime knows, the way to bring down the boss is to nab the low-level guys on smaller charges and build a portfolio. This appears to be what Robert Mueller is doing. Trump’s new lawyer Rudy Giuliani knows this better than anyone – he was the first prosecutor to use RICO statutes in his pursuit of the mafia.

Right-wing talking heads aren’t interested in Trump’s myriad crimes and corruption, though. They are outraged that no smoking gun has been discovered linking Trump to Russian election meddling, and annoyed by any tangential crime. Trump confidante Roger Stone, himself under investigation, suggested that Mueller may charge the president with “some kind of process crime: perjury or obstruction of justice.” The implication here is that Trump didn’t do anything wrong, but in his effort to prove his innocence, he may stumble and hang himself for something petty.

Others on the right have embraced Trump’s conspiracy theory that President Obama, Hillary Clinton, and the deep state spied on his campaign. The FBI admits it sent an informant to speak with Trump campaign officials during the 2016 election, but says it did so only after learning of attempts by Russian agents to establish contact with the campaign. After uncovering more evidence, the FBI then obtained a warrant to surveil former Trump aide Carter Page. Not only is this not a scandal, it’s precisely the FBI’s job.

Republicans openly admit they want the investigation shut down because it is exceeding its initial scope. Their counterattack is having an effect. Conservative media’s counterattack is having an effect. According to a poll by the group Navigator, 59 percent of Americans “believe Mueller has not discovered any crimes.” Like Al Capone taunting Elliott Ness, Trump insists that his lawyer, Cohen, won’t “flip” and turn evidence against him to Mueller, while law-and-order Republicans are among the ones cheering him on most enthusiastically.

Enabled by right-wing media, Trump is successfully waging war on the very idea that the rule of law applies to him and is entering an ever-more fascistic phase of his presidency. Whether Mueller uncovers direct Russia collusion or not, he’s already found much that the American people deserve to know about. We must all have a healthy enough suspicion that the more desperately Trump tries to kill this investigation, the bigger the bombshell he fears being uncovered.