A compendium of Donald Trump’s criminality 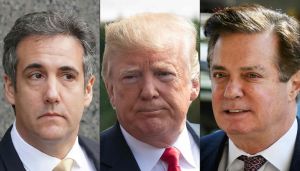 Within minutes of one another, two former high-level associates of President Donald Trump were found guilty of felonies last week. Paul Manafort, the chairman of Trump’s presidential campaign throughout the pivotal summer of 2016, was convicted on eight charges, including tax fraud and bank fraud. Michael Cohen, Trump’s longtime personal attorney, pleaded guilty to eight charges, including tax evasion and making an excessive campaign contribution at the request of a candidate – the hush money paid to one of Trump’s mistresses.