Positives of the Trump presidency 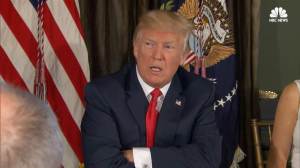 Every day brings new revelations about the extent of President Donald Trump’s crookedness, the corruption of his administration, and the damage he’s doing to our political system, foreign relations and the environment. The deluge of negative coverage has caused Trump and his supporters to accuse the media of a conspiracy against the president, but the truth is far simpler than that: Trump truly is that awful. In fact, in most ways, he’s even worse than the mainstream media portrays.

Still, it’s worth entertaining some potential positives that could emerge out of Trump’s presidency. None of them justify his presidency but, mostly indirectly and by accident, there are ways in which Trump’s complete lack of convention could lead to a positive jolt to the system. Most of these fall under one of three categories: blundering into a decent foreign policy move, breaking our staid expectations of what a politician should be, and accidental admission of the truth.

On foreign policy, Trump has put off many of our allies in the free and Western world. They know they cannot count on America to participate in the fight against climate change or assist with a worldwide refugee crisis. Trump has consistently signaled his admiration for dictators and shown contempt for democratic institutions, human rights and even the Geneva Conventions. He has committed and supported war crimes, including the bombing of a wedding in Yemen.

Little of that, however, would look out of place on his predecessors’ resumes. What would look unusual is the facilitation of peace talks with North Korea. At first, Trump terrified the world with his apocalyptic nuclear saber-rattling toward North Korean dictator Kim Jong-un. Once talks began, Trump put forward a seemingly genuine effort to persuade Kim to denuclearize. Trump granted concessions, including the suspension of war games near the 38th Parallel. He has largely stood back as Kim and South Korean President Moon Jae-in hold historic peace talks.

More recently, Trump announced a full withdrawal of American troops from Syria and a partial withdrawal of troops from Afghanistan. Ironically, it’s these few positive foreign policy moves that often earn Trump the most negative coverage from establishment media, including FOX News. Commentators accused Trump of doing favors for Putin by ceding control of Middle Eastern conflicts to Russia and its allies, as though the U.S. must control every conflict on the globe. Pundits frequently accuse the president of being outsmarted by Kim.

Because he has no filter, Trump sometimes admits truths that other politicians can’t. During the presidential campaign, he exposed America’s system of legalized bribery by bragging that he’d bought off politicians before. Though his claims of opposing the 2003 invasion of Iraq are false, Trump was an early critic of the war, and was outspoken in his condemnation of Hillary Clinton’s record of military interventionism. In an infamous interview with Bill O’Reilly during the 2017 Super Bowl, Trump countered O’Reilly’s assertion that Putin is a killer by saying, “We’ve got a lot of killers. What do you think — our country’s so innocent?” Trump even tweeted that our military budget is “crazy” – a startling admission from any politician, particularly one for whom a campaign cornerstone was rebuilding “our badly depleted military.”

In another rare moment of transparency, Trump essentially admitted that the United States won’t punish Saudi Arabia for assassinating a Washington Post journalist because it would jeopardize an arms deal Trump wants to broker – arms the Saudis will use to perpetrate perhaps the greatest humanitarian crisis on the globe today, in Yemen. Such unabashed villainy is not the kind of thing politicians typically don’t admit to, but Trump is pleased in his role as an international arms dealer.

Trump is the ugliest president of modern times. Overweight and wearing a strange, orange face with a mystifying combover, he’s uncouth, humorless, embarrassing, crude, disloyal, and all but openly racist. He’s flagrantly corrupt, a pathological liar, and a malignant narcissist, with no demonstrable values beyond his own political and financial self-interest. By being so transparently loathsome, Trump reveals our deepest political and cultural flaws and magnifies them hundredfold, so that anyone not completely drunk on partisan Kool-Aid can see them.

However, this, too, could arguably have positive effects. Trump has undone the façade of respectability in American politics. In the new language Trump, along with leftist politicians like Bernie Sanders, have ushered in, issues like corruption and the system being rigged are discussed openly. No longer are sacred cows protected by phony political politesse. If a serial adulterer like Trump can win overwhelming support among Christians, the idea of almost any “character flaw” barring someone from public office becomes laughable.

We have no idea how the Trump presidency will end. Impeachment, resignation, and a second term all seem equally likely at this point. Democrats show every sign of squandering the openings Trump left, but the sheer magnitude of Trump’s awfulness makes eight years of him incomprehensible. Yet as awful as Trump is, progressives should make careful note of their new opportunities. They no longer have to play nice or treat Republicans with undeserved respect. With the gloves completely off, they now have their best moment in decades to make an urgent, unapologetic appeal to the American people, with the dumpster fire of President Trump burning in a perfect backdrop.