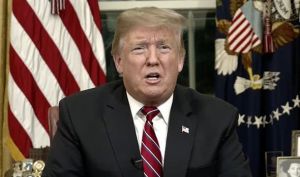 In his address, the president described the southern border as a warzone under constant attack by enemies of America. Trump connected America’s heroin epidemic with border crossings and ran down a short, cherry-picked list of Americans killed by undocumented immigrants to imply that none of them can be trusted. He blamed illegal immigration for job loss and stagnating wages.

Gang violence, drug abuse, and an economic slump are all real problems. It’s baffling, and a strong indicator of their racist attitude, that the right-wing believes these problems will be solved by walling off Mexico. The drugs Trump warned about are mostly smuggled in through official ports of entry, not by drug runners sneaking into America on foot. Virtually all immigrants arrested on terrorism charges were captured at airports, not at the border. There are myriad reasons for Americans’ economic struggles, but the simplest is that Trump’s friends in the business world – much like Trump himself – simply don’t want to pay good wages.

The wall isn’t actually intended to solve these problems. It has a very different purpose: to serve as a political victory for a flailing president, a monument to racist hatred, and physical proof of at least one real Trump accomplishment.

A little over a month ago, President Trump was prepared to sign a deal to keep government open that didn’t include funding for his wall. Then a chorus of voices representing his far-right base, most notably fascist siren Ann Coulter, called him out for reneging on his central campaign promise. Coulter’s column ruthlessly tore into Trump, casting him as a clownish Hollywood nincompoop who’s only in office because the base that elected him believed he would build a border wall. 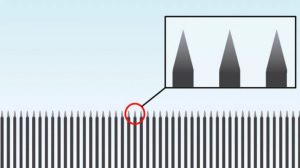 Having difficulty getting the funding and congressional approval he needs, Trump’s new vision for a border wall is steel slats.

With Robert Mueller closing in on him and a new Democratic House majority taking office, the president’s political prospects dim by the day. All he really has left are Coulter and the far-right. Doubling down on this moment is a gambit to preserve their faith in him. It’s not about protecting Americans or averting a humanitarian crisis. Even Coulter and the Trump Administration surely know a wall won’t stop what they claim it will stop.

Even granting that a wall can help prevent unauthorized border crossings, as it may have in San Diego, the best they can do is keep out those too poor to afford a plane ticket. Walls have no effect on people who enter the US legally and overstay their visa, who already significantly outnumber the people caught at the border. There’s no evidence a wall will keep out terrorists or have any impact on drug flow.

There is a crisis at the border, and it is largely of Trump’s own making. As newly elected congresswoman Alexandria Ocasio-Cortez said, “Right now what we are seeing is death, right now what we are seeing is the violation of human rights.” In December, two children died in the custody of US immigration officials. Thousands of children have been taken from their families with no reunification plan by the government. Children have been traumatized into rejecting their own parents.

Most of them, and most of the people trying to cross the border today, are refugees seeking asylum, which international law grants them the right to do. What’s needed are more social workers and judges to process their asylum cases, not a wall or a military presence. Trump’s wall likely would prevent many undocumented people from coming to America, but they’d be simple people seeking asylum, jobs, and reunification with their families – not terrorists looking to harm the United States.

For Trump and the far right, though, there’s very little difference between an asylum-seeking, parentless child and a hardened MS-13 criminal. They’re all a part of the feared “browning of America” that Coulter rails against so stridently. The wall doubles as a symbol of those racist hatreds and as a monument to Trump himself, who derives his self-worth from structures that bear his name.

Beyond being ineffective and unnecessary, there are other problems with the wall. Polling regularly shows some 60 percent of Americans oppose construction of a border wall. The wall will have a devastating impact on the surrounding environment and wildlife. It’s also a legal nightmare, as homeowners along the border prepare to battle the government’s eminent domain claims.

Trump’s border wall is nothing more than a costly, racist, ineffective ego boost for a desperate president, a campaign fairy tale from a crooked conman. Trump is obsessed with scoring a win on this issue, because it’s the most important issue to the far-right fanatics who are most dedicated to him. He needs to hold onto their support through the coming political firestorm of Robert Mueller and a Democratic House majority, and he’s petty and sociopathic enough to hold the entire United States government hostage in order to do it.