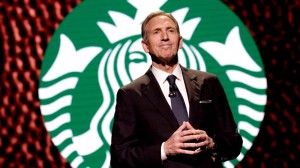 Howard Schultz, 65, oversaw the expansion of Starbucks into a global brand and now feels qualified to run the United States.

Whether or not Howard Schultz, the billionaire former CEO of Starbucks, runs for president in 2020 hinges largely on what direction the Democratic Party goes. Schultz, who has no political experience, is concerned that the party has become too left-wing, pushed by prominent congresspeople like Elizabeth Warren, Bernie Sanders and Alexandria Ocasio-Cortez. In order to save the country from a choice between socialism and Donald Trump, Schultz may be compelled to run as a “centrist independent.”

In a media blitz late last month, Schultz slammed Trump, calling the president “despicable” and accusing him of doing “almost everything possible to discredit the dignity, the civility, the values, the respectfulness of the Oval Office with no degree of any sense of responsibility to the American people.” Schultz’s remarks were notably lacking in specifics. While his most sanctimonious denunciations were of Trump’s demeanor and vulgarity, his strongest policy critiques were directed at Democrats, particularly Ocasio-Cortez.

“I no longer feel affiliated [with the Democratic Party] because I don’t know their views represent the majority of Americans,” Schultz said in a CNBC interview. He added, “I don’t think we want a 70 percent income tax in America,” criticizing Ocasio-Cortez’s now-famous proposal. Schultz called universal healthcare “not American” and “unaffordable,” adding it was as “false as President Trump telling the American people when he was running for president that the Mexicans were going to pay for the wall.”

It is Schultz, rather than Ocasio-Cortez, who is out of touch with the American public. As New York Magazine put it, “raising taxes on the rich consistently ranks as one of the most popular ideas in American politics.” Even a recent FOX News poll showed a whopping 70 percent favorability for raising taxes on income over $10 million – much to the dismay of the network’s hosts and panelists. Similarly, some 70 percent of Americans support universal healthcare, including a majority of Republicans.

Centrists and right-wingers have worked hard to misinform about Ocasio-Cortez’s tax proposal. In a marginal tax system like the one used in the United States, the highest tax rates only apply to earnings over a certain amount. Under Ocasio-Cortez’s proposal, earnings in excess of $10 million would be taxed at 70 percent, but the first $10 million would be taxed at a lower rate. The overwhelming majority of Americans would be unaffected. Pundits who accuse Ocasio-Cortez of coming for 70 percent of everybody’s money are deliberately deceptive in defense of the super wealthy.

Schultz has feuded publicly with New York Representative Alexandria Ocasio-Cortez over her informal proposal to raise the top marginal tax rate to 70 percent.

Defense of the rich appears to be Schultz’s primary motivation for running. He’s cast himself as a civil rights icon for billionaires, arguing that the word “billionaire” itself is too divisive and should instead be “people of means.”

He’s not wrong to be concerned about his class’s perception. In 2017, 53 percent of Americans said they distrusted billionaires. More politicians are being elected on promises to tax the wealthy while publications like The New York Times publish op-eds called “Abolish Billionaires.”

To understand the anti-billionaire fever, it’s necessary to understand just what a billionaire is. Contrary to what Schultz says, “billionaire” isn’t a slur. It’s a mathematical designation, though one that can be difficult to fully grasp. At a rate of $1,000 a day, it would take more than 2,739 years to spend down just $1 billion. Just three billionaires, Jeff Bezos, Warren Buffet, and Bill Gates, control more wealth than the bottom 50 percent of Americans. Meanwhile, nearly 70 percent of Americans do not even have $1,000 in a savings account.

Ideas like universal healthcare, tuition-free college, and even a universal basic income are gaining popularity. Whether we can afford them all is a matter of debate. Simply taking every dollar from every billionaire would put a big dent in the cost, but not cover it completely. However, wealth is not created by billionaires hoarding assets. Economic activity will increase by taxing billionaires and putting their inactive wealth in the pockets of Americans who will spend it. We can do the seemingly impossible – we just have to raise taxes on Schultz and his fellow hoarders.

After his first few weeks of presidential flirtation largely busted, Schultz came out in favor of raising taxes on the wealthy, though he didn’t specify how high his taxes should be. He remains opposed to Ocasio-Cortez’s 70 percent proposal. It’s why he is comfortable weighing the “far-left and the far-right extremes” as about equally dangerous. One wants to raise his taxers higher than he’d like, and the other is the party of Donald Trump.

Public opinion is far more aligned with leftists than it is Trump’s GOP. There is little appetite for a President Howard Schultz. Polling puts Schultz at only around 7.7 percent, but he pulls twice as much support from would-be Democratic voters as he does Republicans. It’s probable a Schultz candidacy could spoil the election for Democrats. If he runs with poll numbers like that, Schultz is demonstrating his clear preference for President Donald Trump over a Democrat.

The American Dream used to be about working a steady job, finding a partner, buying a home, and filling it with children, cars and pets. For the modern right wing, it’s about amassing astronomical sums of wealth and hoarding it far away from the grabby hands of your lazy, greedy, no-good countrymen. Schultz may not like Trump, but his primary motivation for running is to defend himself from the leftist extremism of the American majority. He may cast himself as a centrist, but he’d sooner see a second Trump term than face the stiff taxation of him demanded by the American people.