Throughout his many decades of public life, Trump has been openly petty, vulgar, racist, conspiratorial, and narcissistic. The presidency hasn’t matured him an iota. As president, he’s continued to lie, flirt with dictators, enrich himself and his family, and show no compunction about stripping away benefits and even disaster relief from vulnerable people. Given how brazenly he’s gotten away with it all, though, it’s almost a marvel that he hasn’t gone even further.

According to a 2007 Congressional Research Service report on national emergency powers, in a state of national emergency, “the President may seize property, organize and control the means of production, seize commodities, assign military forces abroad, institute martial law, seize and control all transportation and communication, regulate the operation of private enterprise, restrict travel, and, in a variety of ways, control the lives of United States citizens.”

Granting Trump national emergency powers, when the only emergency on the southern border is the human rights abuses of his own administration, is as over-the-top as it gets. No matter how far Trump turns the dial, though, pundits and politicians follow along and treat his proposals seriously. Trump’s advisers and lawyers argue on national TV that, for instance, the president can pardon himself. Scholars are then invited on TV to debate the claim, and the end result is a collective, “Who knows?”

We are in uncharted waters with Trump. Nobody really seems to know the limits of his power. Regardless of what the Constitution, legal scholars, politicians, or anyone in the media says, Trump’s power is only limited by human beings who can exercise institutional authority. America has never contended with a president who demonstrates such blatant contempt for the rule of law, and it’s not at all clear that the necessary safety mechanisms to keep him from becoming a dictator are in place. 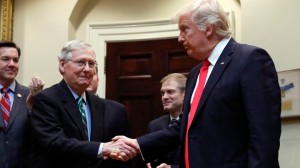 Senate Majority Leader Mitch McConnell has made it clear that the GOP is a political weapon for Trump to use as he sees fit.

Perhaps no body in the country has more institutional leverage over President Trump than the Senate. But Republicans still hold a majority there, and they are standing firm with Trump on the shutdown. Senate Majority Leader Mitch McConnell has blocked two bills to reopen government from coming to a vote in the Senate. Trump would veto the bill, but if Republicans cared about reopening government, they could override him. McConnell has said overriding Trump’s veto is not an option under consideration.

Even as the shutdown takes its toll, Trump’s approval among Republicans remains as high as 88 percent. Republicans can’t afford to cross Trump and alienate a base that so enthusiastically supports him. Likewise Trump must keep the blessing of far-right media, from FOX News to Breitbart. These are some of the most important opinion makers in the Republican base, and they have held Trump to a firm position on immigration. Ann Coulter’s scathing December op-ed was apparently a significant factor in Trump’s decision to shut down the government in the first place.

For that base, Trump could never go too far. They enthusiastically support his most extreme and abusive ideas: the Muslim ban, the ban on transgender military service, family separation and child detention, prosecution of journalists, and more. From posts in comment sections all the way up to Sean Hannity, the pressure is on Trump to hold the government hostage and circumvent traditional legislative processes in order to enact the most radical and fascistic items on his agenda.

Viewed that way, it’s surprising Trump hasn’t declared a national emergency and further empowered himself. It could solve all his problems. He could end the myriad investigations into his shady business and political career, he could silence his critics with force, and he could ram through perhaps the most radically far-right agenda in history. If he tried to assume dictatorial powers, his base, parts of which already refer to him as “God-Emperor,” would love it.

Right now, the only real opposition to Trump is a slim Democratic majority in the House of Representatives and a corporate media that frequently bends over backwards to give him the benefit of the doubt. There are other, less visible institutional pressures to prevent more overt authoritarianism, but it’s not clear they could hold out against a full-blown coup.

Trump certainly isn’t held back from dictatorial ambitions by any personal principles. His presidency has been marked by open admiration for “strong” authoritarians like Vladimir Putin and Kim Jong-Un. When Xi Jinping made himself the president-for-life of China, Trump liked it and joked, “Maybe we’ll have to give that a shot someday.” As a candidate, Trump bragged that he could shoot someone in the middle of 5th Avenue and not lose any supporters. His presidency has largely born out that claim, and it’s only a small step away from, for instance, assassinating political enemies with drones.

Never in his adult life has Trump faced real accountability. He’s been sued or fined thousands of times; both his university and charity were shuttered after being exposed as scams; and he’s been the subject of numerous credible sexual assault claims. None of it’s brought him down. Just as in his business career, his acts of fraud and deceit have had no serious political ramifications.

Given how recklessly Trump has already gotten away with so much, and that he has the unwavering support of the GOP and 24-hour propaganda platforms, it’s hard to guess what’s stopping him from even bolder power moves. If the calculation ever changes for Trump and he decides to grab for more, recent history suggests he will get away with it. He has already thrown the door wide open for far-right policies and more explicitly bigoted authoritarianism. It’s up to the American people to focus on closing it before Trump or anyone else can walk through.