In memory of Michael Brooks, the left’s best commentator 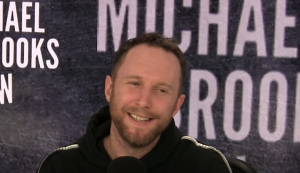 Humanity lost a tremendous ally last week when Michael Brooks, a cohost of The Majority Report with Sam Seder and host of his own The Michael Brooks Show, passed away at the age of 36. Michael was an informed, insightful, witty, and moral voice for a better world. Outpourings of sadness and support came from thousands of activists, journalists, and political figures, including Chris Hayes, Dr. Cornel West, and even former Brazilian President Lula da Silva.

Brooks transcended the world of internet commentary. With Seder, he broke news stories down to their most essential components with rigorous philosophical and moral investigation. He brought a uniquely internationalist perspective to mainstream leftist YouTube, frequently referencing social movements in Latin America in particular. He articulated himself carefully, almost pedantically, but always with an immense amount of warmth, charm, and compassion.

To call Brooks a political analyst almost cheapens the work he did. He dove deeper. Among podcasters, he was without equal. Brooks never simply read headlines. He placed everything in the context of history and our collective aspirations as people.

He was as scathing in his satire as he was cogent in his analysis. One of the best of his many impressions was of Dave Rubin, a podcaster who specializes in normalizing far-right views. Brooks captured Rubin as a cynical dunce who thought bigotry was a valid “idea” to be debated. Brooks also nailed Obama, creating the hilarious and politically incorrect Nation of Islam Obama character to mock the right-wing perception of the former president as an extremist. Brooks imagined Trump advisor Sebastian Gorka as a pompous, arrogant Saturday morning cartoon villain.

Joe Rogan once criticized Brooks as a bully for his unforgiving ridicule of Rubin. Brooks felt sympathy for those who disagreed with him, who had been bamboozled by politicians and pundits, saying, “Be ruthless with systems; be kind to people.” But he didn’t see his differences with Rubin as an honest disagreement. Brooks had the moral clarity to be merciless with bad-faith actors like Rubin and Ben Shapiro, who knowingly work to make life harder for people who haven’t been as fortunate as them.

For his combination of humor, insight, curiosity, and moral wisdom, Brooks would surely have taken his place among Twain, Carlin, and Chomsky. He fit into no orthodoxy other than the one he formed, and continually evolved, based on his perception of what was true and just in the world.

Following an outpouring of support shortly after his passing, Brooks’s recently released book, Against the Web, was backordered at major retailers. The book directly challenged the “Intellectual Dark Web,” a loose coalition of right-wing cultural figures who, despite their large audiences and generous media coverage, frequently complain of being censored. Against the Web is a volley in the larger battle waged by Brooks and The Majority Report to counter the growing, pernicious indoctrination of young people on the internet by the far right.

While the political left is largely scrambled and without obvious leaders, Brooks was a unifier. He was not just a model for commentators, satirists, or activists to aspire to. He was a philosopher who laid serious foundation for a humane, compassionate, sustainable human project. As a performer he conveyed the true joy he felt in making the world a better place, whether by educating us on important class issues or by scoring a trivial laugh on a far-right clown.

There are no content creators who can match Brooks’s record. We lost one of the all-time greats before he had a chance to get there. Fortunately, by being so universal and philosophical in his approach, the hundreds of hours of content Brooks created is timeless and will remain recommended viewing for generations. May he rest in power.

Donald Trump and the right-wing presumption of innocence

Right-wing media is universally friendly to Trump, taking his innocence for granted and echoing his conspiracy theories about the investigation into his shady world.

President Donald Trump has escalated his attacks on the special counsel investigating his campaign’s alleged ties to Russian election interference. Last week Trump unleashed a torrent of tweets in an attempt to undermine the investigation’s credibility. Even as a deluge of shady new information about Trump associates pours in daily, from his personal attorney to his own children and son-in-law, conservative talking heads have dug in their heels behind the president more defiantly than ever. END_OF_DOCUMENT_TOKEN_TO_BE_REPLACED 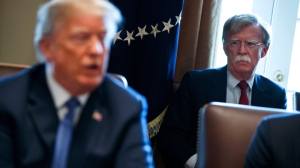 In the revolving door that is President Donald Trump’s Apprentice­-style White House, two major shake-ups in 2018 are especially concerning. Mike Pompeo, formerly the Director of the CIA, has replaced Rex Tillerson as Secretary of State and John Bolton, former ambassador to the United Nations under George W. Bush, has replaced General H.R. McMaster as National Security Advisor. Both men are super-hawks, torture defenders, and Islamophobes. Their move into the White House portends disaster, particularly in the Middle East. END_OF_DOCUMENT_TOKEN_TO_BE_REPLACED

ISIL thrives on mayhem – don’t give it to them

The Brandenburg Gate is lit in solidarity with Paris on Saturday, Nov. 14 in Berlin, Germany. ignacionimo/Instagram

On Friday, November 13, the city of Paris was laid siege by a small band of terrorists from the Islamic State who raided a theater, a concert hall, a soccer stadium and other venues using AK-47s and suicide bombs to. No final tally has been released and many victims remain hospitalized, but at least 129 are known to have died. In terms of death toll, it’s the worst attack in France since World War II.

In addition to the French massacre, ISIL is responsible for downing a Russian airplane carrying 224 tourists to Egypt. The day before the Paris attack ISIL detonated bombs in Beirut, Lebanon, claiming dozens more lives. These attacks are in addition to many smaller ones, the group’s destruction of culture, and the atrocities committed against women, hostages and apostates in ISIL-controlled territory.

After the attacks, French President Francoise Hollande called for the eradication of the Islamic State and declared France at war. France has since launched several air strikes against the Islamic State in Raqqa, Syria, which has served as a capital since roughly 2013. Among the targets were an Islamic State “command post, jihadist recruitment center and weapons and ammunition depot,” as well as a “terrorist training camp.” END_OF_DOCUMENT_TOKEN_TO_BE_REPLACED 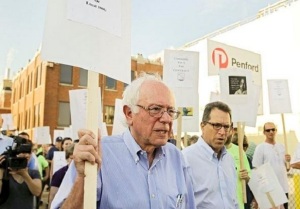 Today is Labor Day, a day on which millions of Americans will enjoy a luxury that, sadly, is rarely afforded to them: a day off from work.

Unlike some holidays, there’s little ambiguity about what Labor Day represents. It’s a day that first gained momentum, and eventually legal status, in the late 1800s. Organized labor had been fighting bloody battles with factory owners and police to help end the injustices of the Gilded Age, and Labor Day was set aside to recognize the contributions of those workers to America’s success.

Now, workers have their holiday, but also face the very real prospect of a return to that Gilded Age. Wages are stagnating, hours are increasing, benefits and pensions are disappearing, and union-busting is back in full force. And all of this is happening at a time when GDP is expanding and the wealthiest Americans are the richest they’ve ever been. END_OF_DOCUMENT_TOKEN_TO_BE_REPLACED