The Middle East has been the focus of great fuss in the century or so since the discovery of its oil. Iraq has been of particular interest to the U.S. since the 1980s, when the Reagan administration supplied Iraqi leader Saddam Hussein with weapons in his war against Iran, where a revolution had recently overthrown U.S.-installed leadership. When Hussein began acting aggressively without U.S. blessing in the early 90s, Washington turned on him. Since then, Iraq has been subjected to sanctions deemed “genocidal” by the UN diplomat responsible for overseeing them and military actions leading to the deaths of over a million Iraqis and the complete devastation of their infrastructure. In addition, there is widespread sectarian violence where previously there had been almost none as Sunnis and Shias turn on one another amid the chaos of war to fill political power vacuums.

This context is crucial to understanding what’s going on in the Middle East now. A militant Sunni faction called the Islamic State of Iraq and the Levant (ISIL, sometimes ISIS or simply the Islamic State) has grown in influence throughout the Middle East, particularly in Iraq and Syria. It is a terrorist organization in the very most classic sense of the word. The most theatrical examples of their terrorism have captured the most attention: barbaric videos showing the gory decapitations of captured journalists and foreign nationals. 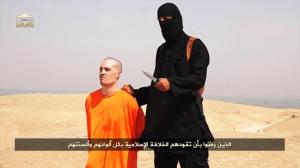 Captured journalist James Foley is about to be beheaded by an ISIL member in a widely disseminated video.

Such base nihilism and mounting regional concern about ISIL’s growth – their membership is estimated at anywhere between 30,000 and 100,000 – led President Obama to initiate airstrikes and coordinate a ground campaign with nearby allies. It remains to be seen how long U.S. troops will stay off the ground. The mainstream media is virtually unanimous in supporting these efforts and ISIL’s total savagery makes their case very simple.

There is also greater international support for Obama’s efforts in the region than there had been for Bush’s, and it’s not hard to figure out why. Saddam Hussein, for all his evils, was a stable leader in the region whose iron fist actually suppressed terrorist activity. Virtually all the world’s leaders opposed his deposition, but no established power wants to see extremists like ISIL rise. On this, the U.S. is in agreement with Hezbollah, Iran and even Al-Qaeda.

Yet there is understandable hesitation to work with the U.S., particularly in the case of Iran, which has been on the receiving end of threatening language from Washington for the last two decades. The New York Times has an interesting way of exploring this in the context of ISIL, saying in a headline the “Ayatollah is dismissive” of U.S. efforts and calling Iran “conspicuously not among” the 26 nations convened in Paris by Secretary of State John Kerry to discuss ISIL. While the headline and first few paragraphs make it seem like Iran is stubbornly refusing to come to the table, not till later is it revealed that Kerry himself opposed Iran’s attendance and did not invite Iran to the conference. But of course, Iran is an official enemy, and there are standard ways of depicting official enemies in the mainstream media, standards which the Times not only comports with but in many cases sets.

In another article, we learn that the new Prime Minister of Iraq, Haider al-Abadi, “took a small step toward alleviating the deep alienation that has made some in the Sunni Muslim minority receptive to ISIL: He said Saturday that he had ordered the Iraqi security forces to stop ‘the indiscriminate shelling’ of civilian communities under the control of the militants.” Remember, the new Iraqi security force was trained by the U.S. military, which knows a thing or two about indiscriminately bombing civilians. This is regarded as progress by the Times.

While ceasing the indiscriminate bombing of civilians is certainly a decent thing to do, it doesn’t quite go far enough. Like many other extremist Islamic factions in the Middle East, ISIL has origins that are rooted in real grievances. Bombs strike real people, who have friends and families. They obliterate entire neighborhoods. Armor-piercing depleted uranium bullets strewn about Iraq’s countryside have contributed to a sharp rise in cancer and birth defects. Such grievances don’t excuse ISIL’s heinous actions, but they are important to understand, as any criminal investigator or psychologist will tell you. These people have been brutalized for a century, if not by their own dictators at home, who are often backed by some imperial power, then by the imperial power itself.

In fact, so widespread is American, European and Russian influence in the region that it becomes almost impossible to keep track of who’s fighting who, who’s backing who, and who’s arming who. Proxy wars of the 1980s saw the U.S. and Russia arming rebel factions that went on to become the Taliban, al-Qaeda and now, ISIL. All over the world imperial powers destabilize a region, arm the factions they want to govern it, then destabilize it again when those factions become hard to control. 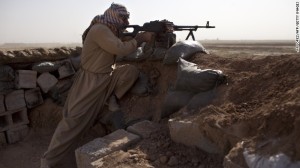 The Syrian army is apparently incapable of handling the growing influence of ISIL within their borders, so in accordance with the pattern President Obama is arming anti-ISIL Syrian rebels. If history is any indication, those same Syrian rebels will one day become the problem, turning those weapons on U.S. soldiers sent to stop them. Recall that Obama seriously discussed becoming involved in a Syrian civil war only one year ago, lending some credence to theories that attacking ISIL is just a cover for the real goal of seizing control in Syria.

Some utterly unhinged politicians and pundits claim ISIL will come into the U.S. and kill us all or institute Sharia law. Not only has ISIL never expressed an interest in such a thing, they wouldn’t have a prayer of pulling it off if they wanted to. Making sure ISIL doesn’t kill anybody else in the Mideast is a worthy cause, but even that isn’t the motivation – it’s worse than naïve to think the real movers of foreign policy are worried about a life here and there, especially Arab ones. And yet something must be done about ISIL.  They’re murder-happy fundamentalists who seek to unite the Middle East under their own caliphate, and they grow more dangerous and numerous by the day. It’s hard to know what to do about that; to back any pony in the Middle East is to one day court disaster. Whatever is done, the endgame must be reducing violence, not enhancing it. Rather than big bombing campaigns and messy involvement in Mideast politics, treating ISIL as an international problem worthy of a coordinated, international, massive police operation may be a better tack.

It’s one of the more pernicious myths that Islamic violence is simply a result of a radical reading of the Koran. Any religion can be used to inspire violence. Not only is Christianity no exception, it’s an exemplar of this – just take a look at all the murdered doctors, beaten homosexuals and lynched African-Americans strewn throughout the last century in America. Extremist Christians committed these atrocities on pretexts far flimsier than those on which ISIL fights. Religious texts are used to justify “holy war,” but without the extensive grievances brought on by bombings and cultural degradation, hardly any Muslim would be motivated to take up the pursuit. Perhaps we ought to examine the possibility of alleviating some of those grievances. Prior to the age of imperial meddling, a lunatic like Osama bin Laden would’ve had as much influence in the Mideast as Fred Phelps did in America. But with every civilian slaughtered by imperial aggression, a new terrorist is born.

While the U.S. already gets most of its oil from North American production, Mideast pipelines remain strategically significant as China and India’s thirst grows. The best way we can stop Mideast insurgency in the long run is to keep our hands off of their oil and out of their politics. We should be doing it anyway, as the colossal dangers of our reckless energy extraction have already pushed the environment and climate to a deadly tipping point. If the U.S. poured all of its resources into producing abundant wind and solar energy instead of in securing foreign markets for oil exporters, we’d have no interest in the Middle East whatsoever and they’d have nothing to wage a holy war over. Wouldn’t it be a nicer world if we all were discussing art, philosophy and space exploration rather than dirty wars in the desert? Alas, for as long as big oil rules, that world will never be.