Recently, news broke that Rolling Jubilee, a nonprofit organization dedicated to the eradication of debt, purchased $4 million in private student loan debt and forgave all of it, alleviating some 2,000 Americans of that oppressive burden. The group purchased the loans for pennies on the dollar from the notorious for-profit Everest College. And it’s only the beginning – according to Rolling Jubilee’s website, they’ve forgiven more than $18.5 million in debt, much of it medical, on only $701,000 raised.

Such activism cannot be praised enough. It’s entirely selfless, brings important issues to light, and directly aids many Americans. But it can only go so far. The total national debt, both public and private, is a preposterous $60 trillion. If Rolling Jubilee succeeded in wiping out $4 million of that total every day, it’d take more than 41,000 years for America to be debt-free. Even if they focused only on, say, mortgages, it’d take over 9,000 years.

Of course, a lot more than $4 million moves through the American economy every day. But the numbers still help illustrate the obvious: something much more radical has to be done, a fact which Rolling Jubilee organizer Astra Taylor concedes. In a recent New Yorker profile, Taylor said, “We shouldn’t have to buy this debt. It’s treating a symptom without ever treating the disease.”

An infographic put out by Rolling Jubilee highlights the grip of debt on our nation.

The problem of debt is far beyond the scope of any one person or organization to take care of. Acting en masse, however, there is a great deal Americans can do. The best solution to the student loan crisis is a very elegant and simple one: stage a collective refusal to make good on student loan debt. Such a boycotting of payments is well within the power, not to mention the rights, of the American citizenry, and it makes good sense to take such a collective action.

In the past, activists have resisted paying taxes on the basis of disagreement with government policies. Among the signatories of a 1968 refusal to pay a Vietnam War tax were Noam Chomsky, Howard Zinn and Gloria Steinem, but the practice dates back centuries – Jesus’s famous “Render unto Caesar” quote relates to the idea. Refusing to pay student loan debt is a similar form of resistance.

The total national student loan debt is more than $1.2 trillion, the bulk of which – about $1 trillion – is owed by students to the federal government. According to a 2013 study, the average debt held by a graduate in 2012 was almost $30,000. Forty million young Americans are saddled with this burden and 7 million of them have defaulted already. 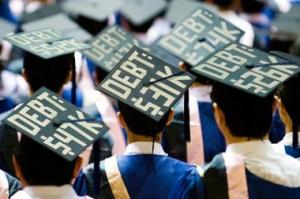 Graduates adorn their caps with the amount of the debt they get to start their adult life with.

To slap such exorbitant debt on new graduates, especially in this economy, is an aggressive undermining of human rights. And the punishment for not paying, for those who either can’t find work or are courageous enough to pursue their dreams despite their debt, can be severe: ruined credit, wage garnishment (for those lucky enough to have wages), vicious harassment from collectors, and enormous fees as collection of the debt is outsourced to private entities. All of this effectively penalizes poverty. With such immense pressure funneling millions of graduates into whatever menial job they can find in order to begin making payments, student loan debt can’t be regarded as anything other than a modern form of indentured servitude.

And there is no indication that help is forthcoming from Washington. For all his talk and campaign promises, the most President Obama has done to offer relief is to lower interest rates from 6.8 percent to 4.66 percent, a paltry offering that will be all but undone as the rates go back up over the next couple of years. Meanwhile, the Department of Education outsources a great deal of its debt collection to private companies that aggressively bully, intimidate, harass and lie to consumers in an attempt to retrieve the money. Far from helping, this “government of the people” has sent the most bloodthirsty financial bulldogs from the corporate sector after their own weary, broke citizens.

Worse, tuition costs continue to soar even as the degree itself becomes, arguably, much less valuable. The market is so saturated with college graduates that the girl making your coffee just might have a master’s in sociology. More tuition dollars than ever go toward covering the costs of bloated university administrations and ever-more grandiose college sports programs and arenas.

Websites like the empathetically named youcandealwithit.com, closely affiliated with the federal government’s student loan program, offer helpful suggestions like, “Take a look at what you have or want and determine what you can’t live without. As hard as it is, you may need to give some things up.” Some of what they suggest living without includes a car, a computer, a cell phone, pets and entertainment. Just be a working, sleeping and eating drone – whatever it takes to pay that debt.

Demonstrators wear signs around their neck showing their total loan. This is how they feel they are viewed by corporate America.

The Congressional Budget Office recently reported that over the next ten years, the federal government will make an astounding $127 billion in profit off of student loans. Thousands of lucrative organizations exist for the sole purpose of extracting money from Middle America, for-profit colleges and debt collectors chief among them. The very practice of buying a debt at a reduced price and then collecting the full amount is one of the most unconscionably immoral crimes that can even be imagined – it’s pure corporate piracy with no community benefit whatsoever.

Student loans provide an easy avenue for resistance. Not paying them would be like taking back the bailout money the government gave bankers and other financial criminals in 2009. The dollar amounts aren’t far off, and if American tax dollars can be used for a CEO’s bonus they can damn sure be used for education. It happens one way and not the other because the moneyed CEO can influence policy in a way ordinary Americans can’t. The balance of power can be shifted, but only by collective action. Nothing could send a stronger message than 40 million indebted graduates standing together in a boycott of student loan payments.

Any number of things can happen after that. Perhaps Americans will demand the right to pay back their debts on their own terms rather than those imposed by collection agencies and the Department of Education. Perhaps they won’t pay anything back at all. There will be backlash from powerful institutions, but those challenges can be overcome.

Waiting for a debt solution from above is not an option. There is simply no motivation for the government or private businesses to reduce the debt Americans owe – they can collect on it until the end of time. It is incumbent on Americans to resist debt, up to and including, if possible, refusal to pay. Just as laborers, suffragists and civil rights advocates rallied for equal rights and fair treatment, debtors must come together and unite with a singular purpose. Rolling Jubilee and Strike Debt have championed the charge for economic justice, both in outlining principles and taking action. All of the 99 percent should join them, whether their debt is from medical expenses, student loans or mortgages.

America has the resources to instate healthcare, education and a home as inalienable human rights. It’s a paradisiacal potential we run the risk of squandering every day we voluntarily admit our bondage to debt. There is no realistic way for Americans to climb out of this hole other than by standing together and refusing to allow the oppression to continue.